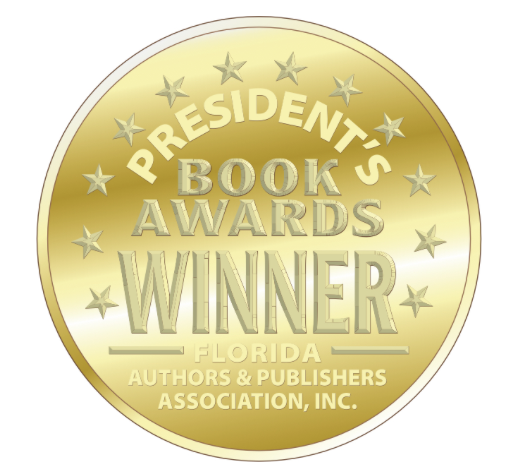 Hurting Like Hell, Living with Gusto: My Battle with Chronic Pain won gold in the Florida Authors and Publishers President’s Book Award contest! I knew I’d won an award but didn’t know it was gold until the banquet (which I missed because I was traveling for other book events). My medal arrived in the mail yesterday afternoon, along with a nice letter from FAPA’s president. I’m super excited and very grateful for the award.

The medal itself is quite nice. It’s heavier than I expected and hangs on a sturdy red ribbon. I haven’t decided what to do with it yet, and although I have fun memories of the long-gone trophy shelf in my childhood bedroom, I doubt I’ll recreate the shelf in my own house. For now, the medal hangs on a cabinet pull in what we lovingly call “the dog room” and the certificate is in a folder until I buy a frame. Winning a prize as an adult is a bit strange. As a kid, I loved (and expected) trophies and medals for sports. Sometimes they were participation trophies, but much sweeter were the trophies I earned for playing on winning soccer teams, sparring against larger Tae Kwon Do opponents, or making it to the top of a tennis tournament. As an adult, I’ve scored a small handful of running medals– two for participation and two for placing in my age group in races. All four of those awards are in a drawer somewhere, mostly because I wasn’t sure what to do with them after the initial excitement waned. This writing medal, though– this one is a big deal to me. This one signifies a ton of hard work, anxiety, tenacity, sacrifice, and uncertainty. The book award medal will go…somewhere. And not in a drawer.

I’m not one to throw around diagnoses in jest, but when I told one of my friends about my angsty feelings around the lead-up to the award announcement, she asked me if I’d ever heard of imposter syndrome. I hadn’t, but it’s an interesting concept that at least in casual conversation could apply to a lot of creative women I know. Google it if you want details (I did), but basically, from what I read, it’s the idea that a person doubts her accomplishments and worth and doesn’t believe she deserves any honor or recognition she receives. Pretty much, it’s a lack of belief in self.

After my friend brought up imposter syndrome and I did some Googling, I reflected on the conversation that prompted her to ask me if I’d heard of the syndrome. I remembered the moment I received the email that told me I’d won an award. The email didn’t say what level– gold, silver, or bronze– but said I’d won and that the exact prize would be announced later at a banquet. My first thought was that the email was sent to me in error. I scrutinized it for personalization or any clue that the sender really meant my book was a winner, but despite seeing my name and my book’s title, I still wasn’t convinced. My next thought was that if I’d won, it surely was bronze. I’d have been very happy with bronze or silver, and both are great honors in a highly subjective business. But something’s not right that I assumed I wasn’t worthy of winning anything and definitely not winning gold. Imposter syndrome? Maybe, but I don’t care much about giving my feelings a name. I mostly care about dissecting those feelings, getting to their root cause, and trying to do a little self improvement. I have a few suspicions, but nothing that I’m ready to declare an answer yet.

A few minutes of reflection on feelings of undeserved awards bring me to this point– self-belief is a delicate thing. It comes easily to some and is extracted like a sore tooth for others. I’m probably a middle-grounder, and some days I’m full of confidence and other days I’m a withered pile of doubt. To my friends who’re writers, artists, musicians, and creators of beautiful things– let’s try to stop doing this crap to ourselves. We face enough obstacles without having to blast through walls we construct. Maybe mantras, meditation, motivational charts– I don’t know. If y’all think of something good, let me know. In the meantime, keep making great work, my friends, and celebrate your much-deserved rewards.